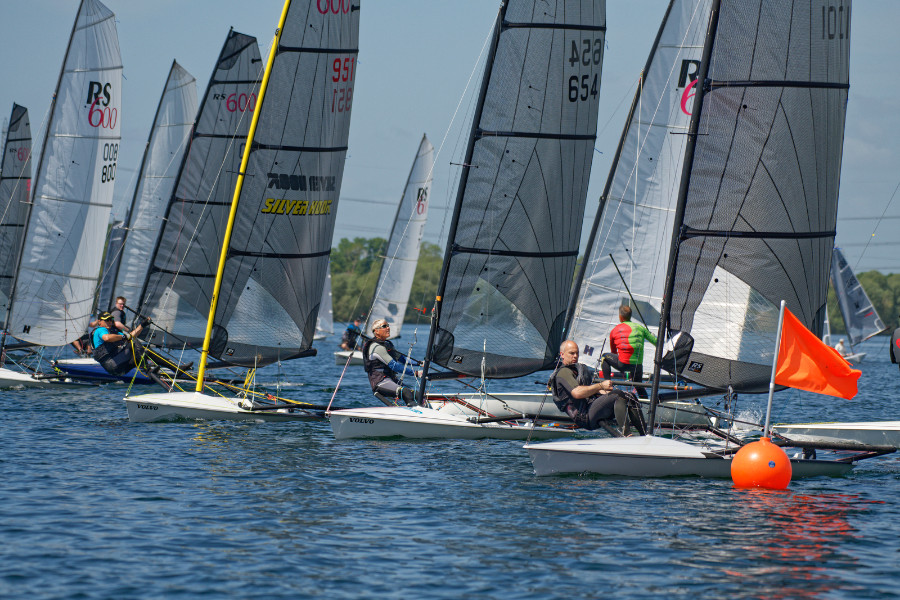 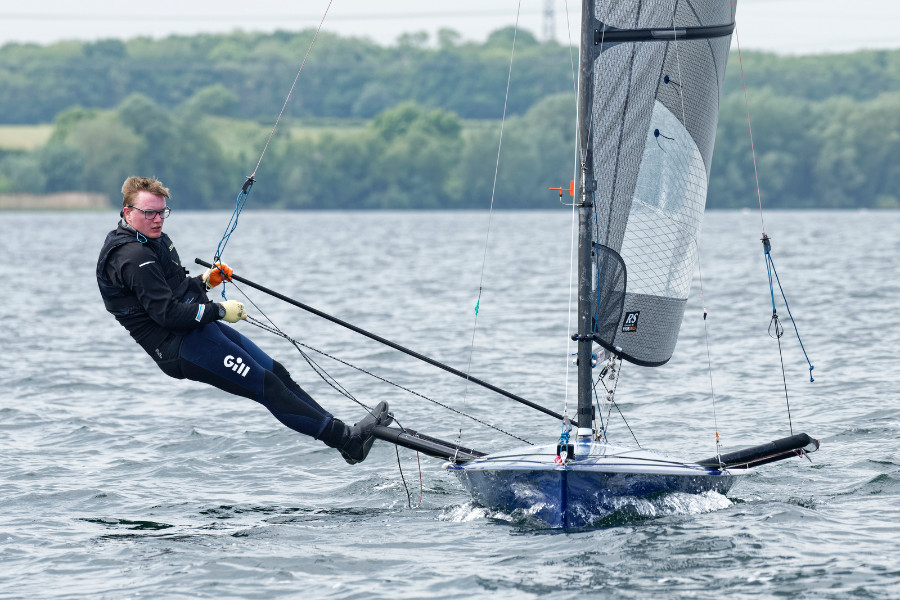 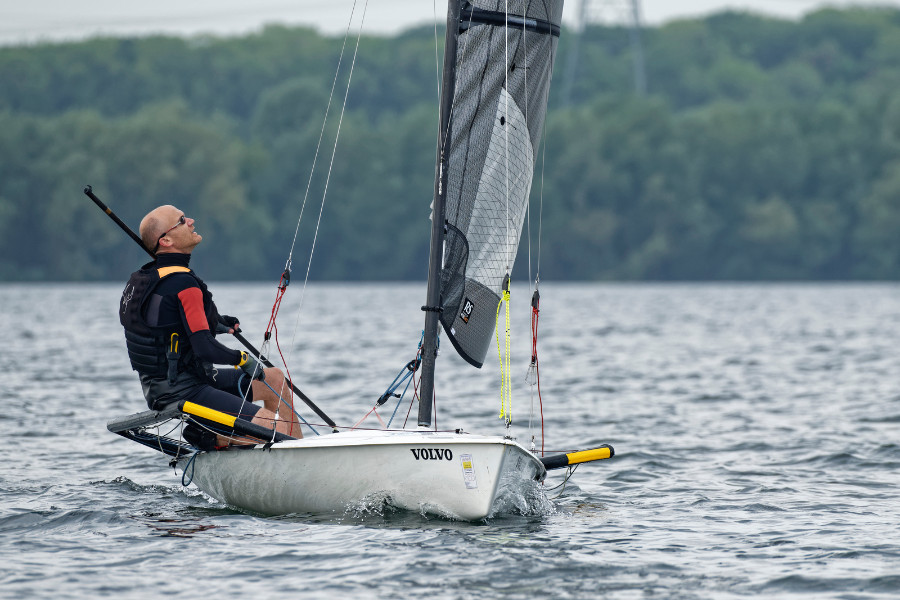 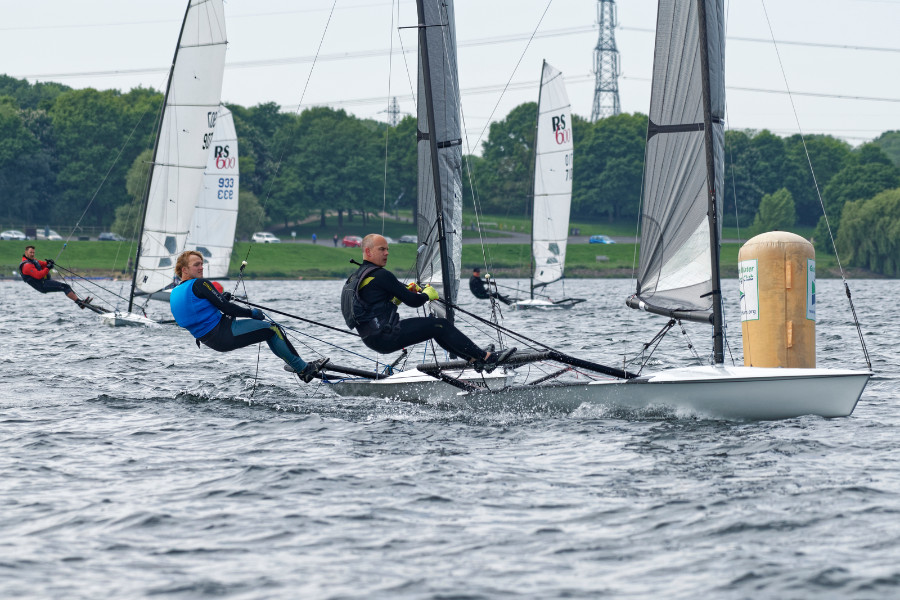 As the RS600 fleet gathered at Grafham Water for their 2022 Inland championships they were met with the sight of a rather glassy lake that was bathed in sunshine. Although the likelihood of there being any racing didn’t look very promising the Race Officer declared his intention to try and start on time as the forecast suggested that the best prospects for a sailable breeze would be between midday and two o’clock.

With what little wind there was blowing from the South the fleet launched early to make their way out to the starting area on the far side of the lake. After a couple of postponements, a light breeze filled in from the South and a course was set. At the start the port end was favoured and Jamie Mawson took the pin end with Ian Marshall and Mike Iszatt just above him on the line. Unfortunately, this breeze faded away and a new streak of wind came down the right side of the course creating a big split in the fleet and leaving some boats stuck in the middle with nothing. Those that had gone furthest left or right up the beat converged at the top mark while others were left becalmed in the centre of the course. The wind became very fitful for the rest of the race with long periods of flat calm interspersed with little catspaws of breeze from seemingly random directions. A small group of boats broke away at the front and finished fairly close together while the rest of the fleet struggled to finish inside the time limit with the breeze dying almost to nothing. Tim Cutsforth took the gun with Scott Holland in second and Chris Haslam narrowly holding on to third from Ian Marshall.

To everyone’s great relief the decision was made to abandon for the day and attempt to squeeze a fourth race into Sunday’s schedule. It still took the best part of 30 minutes for the fleet to make it back to shore which was further proof that no more racing was possible in the calm conditions. With the boats packed away for the night a select group of sailors and guests adjourned to the local pub for an enjoyable meal and the odd beer or two thanks to Jamie who organised this in advance.

Day two dawned with a freshening Easterly breeze and grey skies so with four races in prospect it was still all to play for and plenty of opportunity for those that were carrying big scores from day one. Sadly, Chris Haslam had fallen ill overnight which rendered him unable to take any further part in proceedings.

In the first race of the day there was a close battle for the top places on the opening lap between Jamie, Mike, Ian and Scott with Jamie eventually breaking away to win and Mike taking second ahead of Ian by using the bias on the finish line to good effect. Scott slipped back to finish eighth while George Smith recovered well from a bad start by climbing back through the fleet to take fourth.

By race 2 the breeze was starting to increase although there were some sizeable shifts and occasional holes to negotiate. Local stalwart Alistair Farman made good use of the touching marks dispensation when he landed his sail on the first windward mark just managing to prevent a full capsize! The leading bunch which included George, Jamie, Mike, Matt Potter and Ian set off down the first run with Mike and Ian gybing early to get across to a streak of breeze down the left. In an attempt to free a line jammed in his kicker block Mike capsized midway down the run leaving Ian and Matt to chase the two leaders. Jamie managed to hold George at bay to the finish and took his second win ahead of George while Ian just held on to third after the hard charging Matt stuffed his final tack for the finish line. Tim who had never been far from the front group took fifth ahead of Alistair.

The wind was still increasing gradually and showing signs of clocking right by the start of race 3 and the fleet got away cleanly with boats spread more evenly along the line. By the first Mark a similar pattern started to emerge with George and Jamie rounding ahead followed by Mike and Ian. As the   race progressed the wind shifted further to the right with some wicked gusts coming over the trees on the nearest shore. George and Jamie made the best of the second beat and pulled out a massive lead allowing them to concentrate on their private battle while Ian and Mike were enjoying a similar close fight further back. This felt like the hardest race of the weekend and some of the fleet were starting to show signs of fatigue with more mistakes being made leading to place changes further back in the fleet. Ian surrendered third place on the last lap after capsizing to windward in a vicious backer allowing Mike and Tim to get past. At the finish George held on to win from Jamie with Mike taking third ahead of Tim. Brian Briggs who had sensibly stayed at home on the Saturday to avoid the driftathon sailed his best race of the day to claim sixth and decided that maybe this was a good time to pull stumps and head for an early shower.

Going into the last race it was still theoretically possible for George to win the Championship if he finished first with Jamie fifth or worse although that seemed unlikely to occur based on the form Jamie had demonstrated so far. The battle for third overall between Tim, Mike and Ian was also going to be decided on the result of the last race so there was a lot still to play for as the fleet lined up to start. The wind had gone back to the left between races which gave the line a slight port end bias so Ian sailed down towards the pin and started with Mike and Jamie just above. These three sailed fast in clear air almost to the port tack layline before tacking in sequence back towards the windward mark. George, who had gone right a bit earlier, managed to round in the lead with Ian and Jamie close behind. Mike was also in close attendance so the scene was set for the various battles to be played out. Jamie realised that he could afford to let George take the win so initially concentrated on securing second place by putting pressure on Ian. Ian decided to let Jamie go so that he could keep a closer watch on Mike without risking everything chasing second place in the race. Jamie got a little bit of help from the D-zeros as the fleets got mixed up together on the bottom reach. This allowed him to get around Mark 4 cleanly while Ian got pinned out to the right waiting for some of the D-zeros to tack for the upwind gate.  Jamie clearly found an extra gear which he used to catch and pass George on the last lap to take the final bullet and clinch the championship. Ian rounded the last mark just ahead of Mike, but had to wait for him to tack before heading towards the finish. Unfortunately for Mike he was only just laying the far end of the line and Ian was able to reach down across him to retain third place. Alistair finished fifth just ahead of Tim with Cliiff Haslam saving his best till last and taking a well-deserved seventh in front of Matt.

With an almost perfect score on day 2, allowing him to discard the sixth place from Saturday, Jamie emerged as the winner overall and becomes the new RS600 Inland Champion.

Rope 4 Boats hats were presented to the first three overall and vouchers were given to Tim, Mike Graham and Will.

A big thank you must go to Grafham Water Sailing club for doing such an excellent job managing the three classes and getting all but one of the scheduled races in despite the disappointing lack of breeze on Saturday.

Thanks also to our sponsors Rooster and Rope 4 Boats for their generous support.