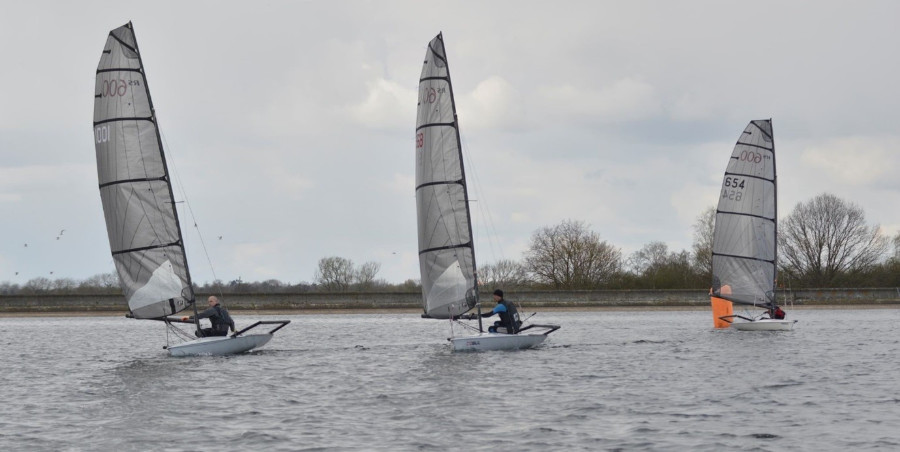 A small but select band of RS600s gathered at Oxford SC for the first ROOSTER Tour event of the year as part of a multi-fleet event which also included Contenders, K6’s and D Ones.

The 600s and Contenders shared the same trapezoid course with the 600s starting first followed by the Contenders three minutes later. The first race got under way after a short delay to allow the wind to settle although a left shift not long before the gun saw the main contenders all starting at the pin end and almost making it to the windward mark on one long port tack. To say that the conditions were a bit variable is something of an understatement as the fleet not only experienced four seasons in one race, they also saw big changes in wind strength and direction. Three boats soon established themselves at the head of the fleet with Jamie Mawson, Dan Robins and Ian Marshall enjoying a close battle with frequent place changes. Jamie and Ian were neck and neck on the last lap until Ian dropped his mainsheet just before the gybe mark resulting in a windward capsize and a swim to retrieve his lost hat. This last move probably cost Ian second place as Dan swept past while he was still righting the boat, but at least he did get his hat back. Jamie took the win ahead of Dan with Ian crossing in third place.

This seemed to set the pattern for the day as another closely fought battle ensued between the same three boats in the second race with each holding the lead at various stages although by the finish Jamie held a narrow lead from Ian in second and Dan not far away in third. The leading Contenders who had started just three minutes behind took a further twenty-five minutes to finish after getting stranded on the reaching legs as the wind died to nothing.

Race 3 was delayed waiting for the forecast breeze to materialise so thinking that it looked unlikely to happen, some of the 600s started heading back to the shore on the basis that if the wind did pop back up it wouldn’t take long to get back to the starting area. Jamie got back to the launching ramp first and put his boat on the trolley so that he could make a quick dash to the ablutions in the clubhouse. Unfortunately for him during the short period he was indisposed the breeze suddenly arrived so when he came back his trolley was still where he had left it, but his boat wasn’t! It had decided to launch itself and head back to the start on its own and had managed about fifty yards before capsizing. After taking a few seconds to work out what had happened and recover his wits Jamie elected to do his best Adam Peaty impression and swim as fast as he could after his drifting boat. After retrieving his floating daggerboard and getting some assistance from the safety boat, he was re-united with his boat and set off towards the committee boat. Meanwhile in the area near the start the fleet had experienced a sudden squall from the East with accompanying snow that drastically lowered the temperature making those who had been over dressed for the earlier conditions quite glad of their drysuits and steamers.

The race finally got underway with Dan getting another good start and establishing a short lead over Ian with Jamie still sailing down towards the line having missed the start by a good thirty seconds or so. Jamie hooked into a nice right shift up the first beat so pulled right up to the two leaders and the chase was on. Halfway through the race the breeze dropped again and Jamie managed to catch and pass Dan having already overtaken Ian on the second reach. The wind shifted back to the East again turning the bottom reach into a beat allowing Ian to find a bit more wind away from the shore and snatch second place ahead of Dan with the first three boats finishing only a few boat lengths apart.

This left Jamie as overnight leader with Ian in second and Dan one point behind in third.

The sailors arrived at the club on Sunday morning to find the lake looking extremely glassy and mirror-like with not a breath of wind anywhere so a one-hour postponement was declared in the hope that the breeze would fill in from the North as per the forecast. With seconds to spare before the decision to abandon was about to be made the flags started fluttering and the fleets were given 30 minutes to launch and get to the start for races four and five.

The top three boats all started close together at the windward end of the line with Dan again getting the best start and gaining a small lead. Ian tacked off to the right and picked up a nice streak of wind that allowed him to round the windward mark first with Jamie and Dan close behind. Towards the end of the first lap Ian held a narrow lead over Jamie with Dan a distant third. Everything changed on the second beat with the breeze dying away before coming back in streaks from several different directions which allowed Jamie and Dan to sail past the hole Ian had found into the leading places. The new wind then steadied up from the Northwest which meant that the places stayed the same to the finish although Ian had managed to close the gap behind Dan on the downwind legs.

Race Five was abandoned as the wind was still not steady enough to set a course and time was up.

This left Jamie as the clear winner with a perfect score although there were place changes in every race with each of the top three holding the lead at times. Dan and Ian were tied on points with identical scores, but Dan took second overall as he beat Ian in the last race.

In addition to the prizes for the top three there were special prizes awarded thanks to ROOSTER with Jamie Mawson taking the well-deserved winner’s prize in spite of nearly losing his boat, Dan deservedly taking the mid fleet hero prize on the basis of his consistently good starts and Ian getting the Endeavour prize for throwing away a second in order to rescue his hat!

Thank you to Oxford Sailing Club for hosting the event and a special thanks must go to Miles Roebuck and his race team for managing to get most of the races in despite the somewhat variable and at times challenging conditions.

The RS600 National Tour will continue at Bough Beech on 16th and 17th April, for a new-style race and train event, where sailors of all levels will be warmly welcomed for a day's coaching by George Smith, followed by a day's racing.

Photo of the three leaders’ courtesy of Adrian Howe